They are all the rage these days. Movies in 3D. Soon it will be hard to see a movie at a cinema without having to wear those silly glasses. It’s also a new excuse to add to the ticket price. But in reality it is all just a gimmick, yes, even for those ultra-gimicky movies like Avatar.

That’s right. I’ve said it. I didn’t really enjoy Avatar. It went on and on and frankly I’m kind of annoyed that the humans didn’t wipe out the blue guys. Sure the movie was visually very fancy and there were lots of ooing and ahing about the 3D visuals (which I agree were spectacular), but in adding the third dimension to the visuals the movie lost one of the most important dimensions, substance.

And that’s where the problem really lies. The addition of 3D to the movie world has just given the movie makers of today yet another distraction from actually making a good movie. You know, one where you actually care about the characters. 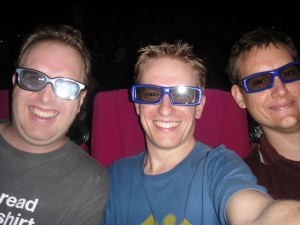 The other thing that bugs me about movies in 3D is that it can make it very difficult to focus on what is going on. Although I will give credit to The Last Airbender which made only very subtle use of 3D and I could actually read the text when it appeared without straining. Piranha on the other hand made the text almost impossible to read.

I seriously question the need for presenting films in three dimensions. Movie makers have been using a simple two dimensional screen for years and doing just fine. They use lighting, shadows and other fancy tricks to provide the illusion of depth and when you are caught up in the movie you don’t even really notice. So I think that’s where the problem really is. In 3D movies all I notice is that it is in 3D and it becomes harder to recognise and interpret the story that is actually happening on the screen. It sounds odd, but I find it harder to actually immerse myself in a 3D film.

I suppose one big reason the studios might be pushing for more 3D film releases apart from the increased ticket prices is that it might be a way to thwart some camcorder piracy of their movies. Although It would probably be fairly simple to put a filter on the camera so that’s probably a stupid reason.

And if the kids out there want to really play with the whole three dimensional thing, I suggest placing two objects one behind the other. Close one eye and line up your sight so that the back object is obscured. Now alternately close and open each eye. It’s like magic.

Recent in the mill